HKCERT is pleased to bring to you the "Hong Kong Security Watch Report" for the third quarter of 2014.

In 2014 Q3, there were 18,087 unique security events related to Hong Kong used for analysis in this report. The information is collected with IFAS1  from 19 sources of information2.  They are not from the incident reports received by HKCERT. 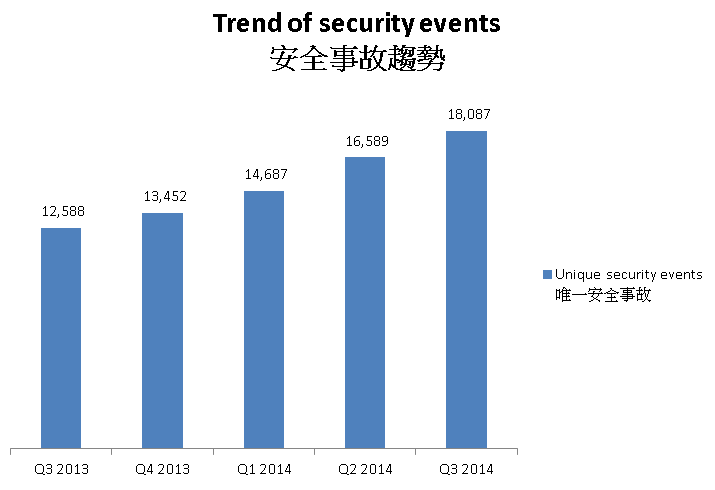 The total number of security events has increased in Q3 2014 and the increases have been carrying on since Q3 2013. The increase was mainly contributed by the server related events, which have been increasing since Q4 2013.
Contents 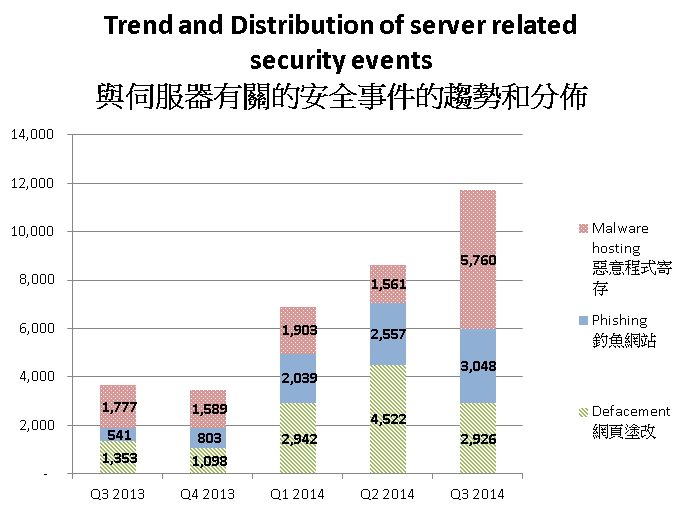 The number of server related security events significantly increased by 36% in Q3 2014.

In this quarter, the numbers of defacement events decreased by 35% while the number of phishing events and malware hosting events increased by 19% and 269% respectively.

The sharp increase of malware hosting events was due to a few mass compromise cases. It can be revealed from the IP/URL ratio, which increased from 4.45 to 14.12. The most serious case contributed 2110 malware hosting URLs. After investigations, a large number of the URLs were hosted in servers that used out-of-dated software, which may be the causes of the compromises. HKCERT cannot emphasize more on the importance of applying security patches. Websites and server administrators should pay attention to the vulnerabilities of the software and patch them in time.

This quarter, we discovered a phishing campaign targeting Alipay, which is a popular online payment system. Among the 3048 phishing URLs, around half of them got a similar pattern of [a/b][1-4].asp, e.g. “a1.asp” or “b3.asp”. An optional parameter, “?bank=[bankname]”, which specifies the bank logo to be used in the phishing page, can also be added, such as “a1.asp?bank=ccb”. All those URLs were linking to fake Alipay login pages. Careless users who enter their Alipay login credentials will give out that sensitive information to the cyber criminals and may incur financial loss. According to our data, this pattern was first discovered in March, and then the number started to increase in the following months. We have passed this case to the related parties to follow up and will keep monitoring such phishing URL patterns. 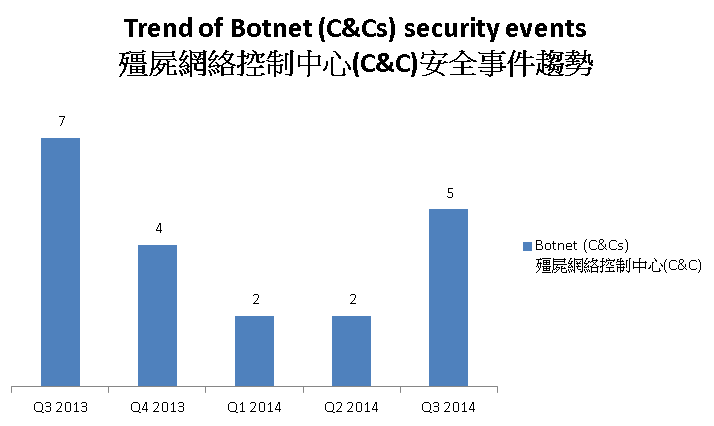 There were 5 C&C servers reported in this quarter. Three of the reported servers were identified as Zeus C&C servers, while the other two were IRC bot C&C servers. 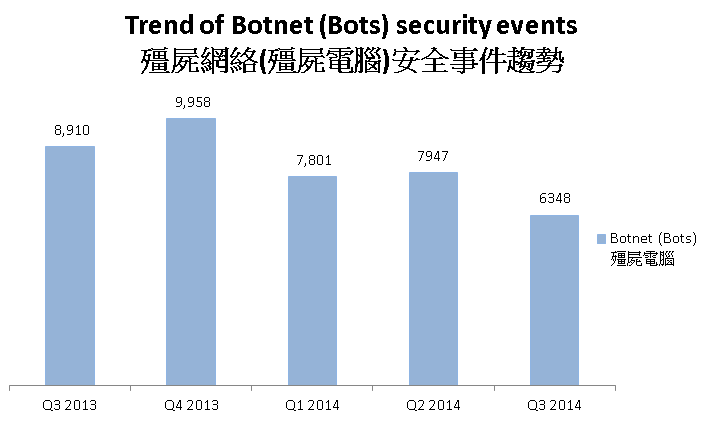 Number of Botnet (bots) on Hong Kong network decreased in this quarter.

In Q3 2014, the number of botnet infections in Hong Kong decreased by 20%, 9 of the top 10 botnets have their numbers decreased or roughly unchanged.

Conficker, Zeus and ZeroAccess have constantly been the top three botnets since we started collecting data in Q2 2013. Among them, the number of ZeroAccess events recorded the largest drop last year. Its number dropped from 2802 as of Q3 2013 to 1062 as of Q3 2014. It’s a drop of 37.9% or 1740 events. Its number was dropping steadily at a rate of 300-500 events every quarter. If the rate persists, the number of ZeroAccess events will drop below 1000 at the end of this year.

5 The number botnet(bots) security events in Q4 2013 was adjusted due to the update of numbers of the Zeus botnet.