HKCERT is pleased to bring to you the "Hong Kong Security Watch Report" for the fourth quarter of 2019.

Nowadays, many networked digital devices, such as computers, smartphones, tablets, are being compromised without the user's knowledge. The data on them may be mined and exposed every day, and even be used for various criminal activities.
The Hong Kong Security Watch Report aims to raise public awareness of the problem of compromised systems in Hong Kong, enabling them to make better decision in information security. The data in this quarterly report focuses on the activities of compromised systems in Hong Kong which suffer from, or have participated in various types of cyber attacks, including web defacement, phishing, malware hosting, botnet command and control centres (C&C) or bots. "Computers in Hong Kong'' refer to those whose network geolocation is Hong Kong, or the top level domain of their host name is ".hk'' or “.香港”.

In the earlier published report, there was an error in the Botnet (Bots) security events. The number of security events of Nymaim, Virut, ZeroAccess, Pushdo, Nivdort, Bedep and Corebot bots were missing. The affected contents in the report are as below:

botnet families in Hong Kong network in Figure 12 and Table 3.

All related contents of this report have been corrected.

In 2019 Q4, there were 9,911 unique security events related to Hong Kong used for analysis in this report. Data were collected through IFAS1 with 11 sources of information2, and not collected from the incident reports received by HKCERT. 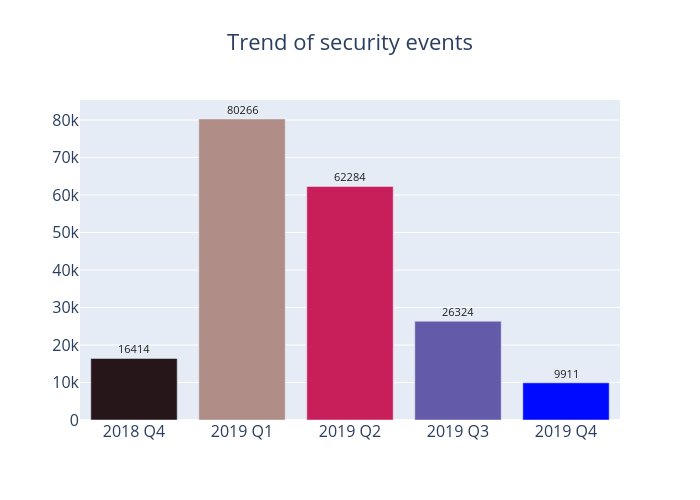 In the last quarter of 2019, all types of security events have fallen back to relatively low levels as the total number of security events amounted to 9,911, down almost two-thirds on the previous quarter’s figure. The most notable decline was seen in malware hosting events, which fell by more than 93%, while a 70% decrease was reported in phishing events.

Server related security events include malware hosting, phishing and defacement. Their trends and distributions are summarised below: 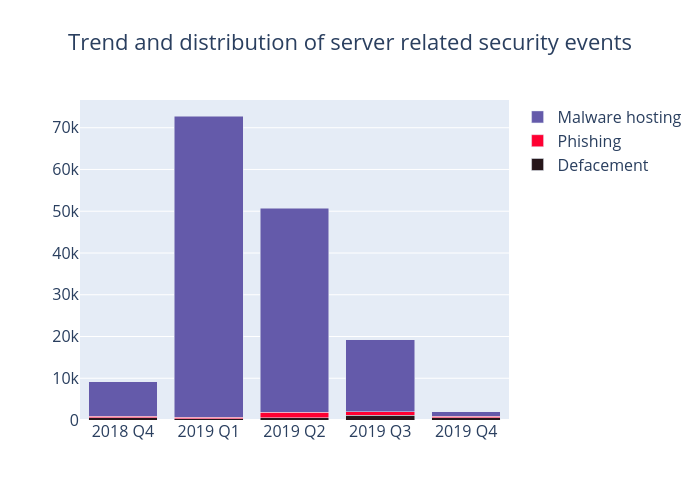 As shown in Table 1, having reached a peak of 72,201 events in the first quarter of 2019, malware hosting fell continuously to the lowest point of the year with 1,185 events only. The number of malware hosting IP addresses involved has also dropped sharply to 63, the first time since the first quarter of 2018 that double digits are recorded for its occurrence.
Phishing events also declined by nearly 600, while the number of phishing IP addresses involved fell from 196 in the previous quarter to 55. After analysing the data, we observed that while Apple iCloud continued to be the main target of such attacks, eBay-related phishing events have also increased. The rise might be attributed to the end-of-year sales, with fraudsters usually taking this opportunity to conduct phishing attacks against the branded online shopping platforms.
Meanwhile, defacement events and the number of defacement IP addresses involved fell by nearly half and 36% in this quarter respectively. Further analysis of these IP addresses in Zone-H and Shodan 3 revealed that around a quarter of servers on these IP addresses still carry security vulnerabilities, and some of them are even using End-of-Support (EOS) operating systems, which are deemed the possible main causes of defacement incidents.

The trend of Botnet C&C security events is summarised below: 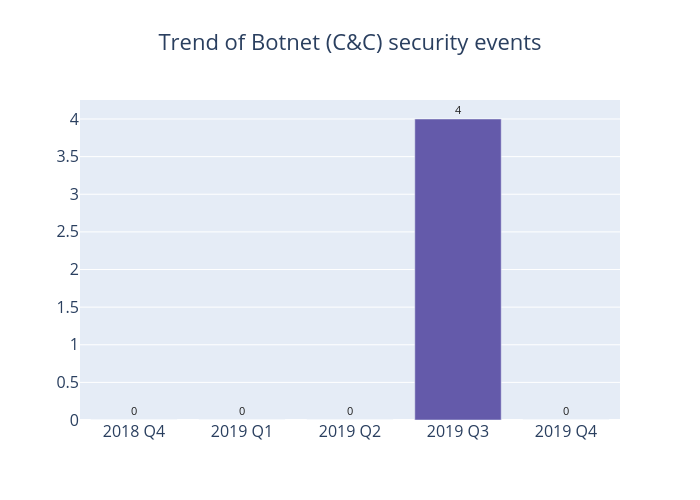 There was no Botnet Command and Control Centers (C&C) security events in this quarter.

The trend of botnet (bots) security events is summarised below: 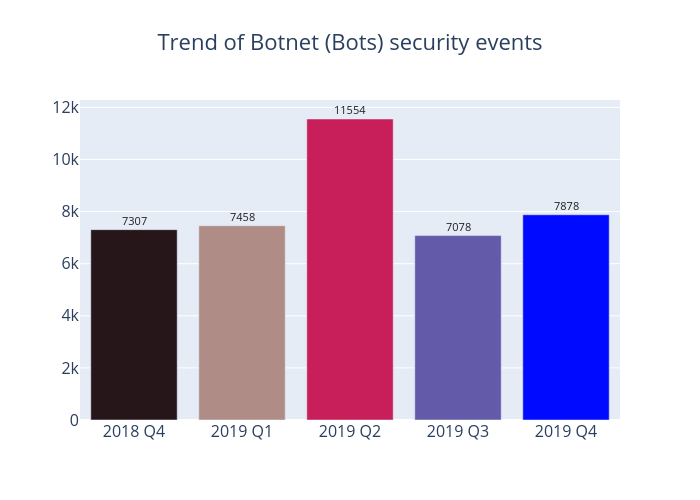 In 2019 Q4, the number of Botnets (bots) in Hong Kong network has increased by 11.3%, or 800. Most Botnet events show a downward trend, with WannaCry bots falling by nearly half to just 354. On the other hand, both Nymaim and Avalanche bots have hiked dramatically by more than 6 and 3 times respectively (see Table 3). Avalanche is a cyber crime hosting platform serving multiple malware families. Hackers can use it to deliver various malwares (such as Nymaim, Gamarue, Tinba, and Matsnu, etc.). After further analysis, it emerged that the number of unique IP addresses attemping to connect the Avalanche sinkhole from the end of November to December was persistently high, which was consistent with the rising trend shown by Nymaim sinkhole data. In addition, by comparing the Avalanche Botnets data of the previous three quarters, there have been notable increases in Nymaim and Matsnu malware events. These two malwares are trojan and both can be used as a springboard for further intrusions, such as ransomware attacks.
HKCERT has been following up the security events received and proactively engaged local ISPs for the botnet cleanup since June 2013. Currently, botnet cleanup operations against major botnet family Avalanche, Pushdo, Citadel, Ramnit, ZeroAccess, GameOver Zeus, VPNFilter and Mirai are still ongoing.
HKCERT urges general users to join the cleanup acts, ensuring their computers are not being infected and controlled by malicious software, and protecting their personal data for a cleaner cyberspace.

3 Shodan is a search engine for Internet-connected devices: https://www.shodan.io/