HKCERT is pleased to bring to you the "Hong Kong Security Watch Report" for the first quarter of 2020.

Nowadays, many networked digital devices, such as computers, smartphones, tablets, are being compromised without the user's knowledge. The data on them may be mined and exposed every day, and even be used for various criminal activities.
The Hong Kong Security Watch Report aims to raise public awareness of the problem of compromised systems in Hong Kong, enabling them to make better decision in information security. The data in this quarterly report focuses on the activities of compromised systems in Hong Kong which suffer from, or have participated in various types of cyber attacks, including web defacement, phishing, malware hosting, botnet command and control centres (C&C) or bots. "Computers in Hong Kong'' refer to those whose network geolocation is Hong Kong, or the top level domain of their host name is ".hk'' or “.香港”.

Notice for the correction of 2019 Q4 report

The 2019 Q4 figures used in this report is based on the corrected version.

In 2020 Q1, there were 14,433 unique security events related to Hong Kong used for analysis in this report. Data were collected through IFAS1 with 10 sources of information2, and not collected from the incident reports received by HKCERT. 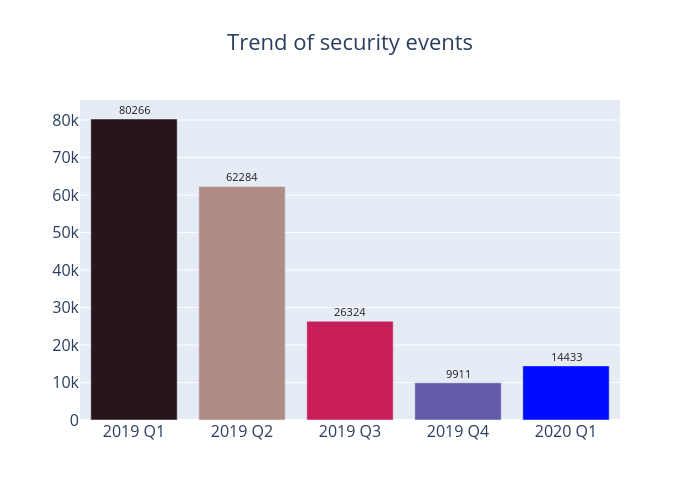 In the first quarter of 2020, the total number of security events raised by 45.6%, from 9,911 in 2019 Q4, to 14,433. The growth was mainly attributed to the increase in the number of malware hosting events, which jumped up by 3.5 times, to 5,445 in this quarter. The second obvious change was the rise in phishing events, up by more than 50%. The count of defacement and botnet events did not change much when compared with the previous quarter.

Server related security events include malware hosting, phishing and defacement. Their trends and distributions are summarised below: 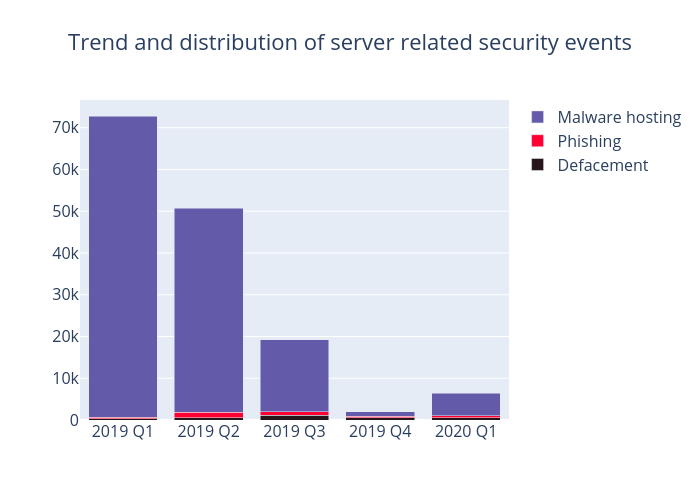 As shown in Table 2, after falling continuously last year, the number of malware hosting events began to go up again this year. The amount of malware hosting involved IP addresses soared by more than 20 times (Figure 9), from 63 in 2019 Q4 to 1,330 in this quarter. The highest count was 961 events on February 9, 2020, which accounted for 17.6% of total events. Furthermore, we also noticed that the malware hosting URLs that were using the ".top" top-level domain increased significantly, accounting for 7.4% of total events, while it was only 0.5% and 3.4% in the third and fourth quarters of 2019 respectively.
Compared with the previous quarter, the number of defacement events fell slightly by 19 to 572; while the amount of defacement involved IP addresses decreased by around a third. According to data from Zone-H, apart from the most commonly known system vulnerabilities, other compromised methods such as file inclusion and SQL injection also had an upward trend, rising 3.22% and 6.41% respectively. Besides updating the security patches of systems regularly, HKCERT advises all website administrators and developers to pay attention to the vulnerabilities in web application and secure coding practices. A web application security risk assessment should also be conducted before system launch and at regular intervals. Details can refer to Open Web Application Security Project (OWASP) Top 10.

The trend of Botnet C&C security events is summarised below: 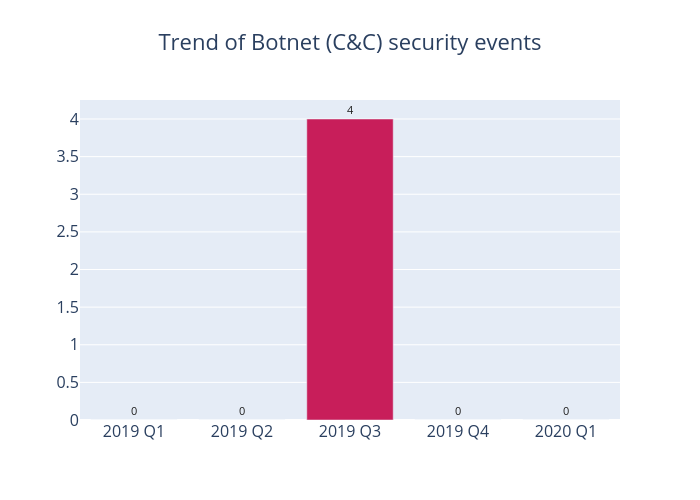 There was no Botnet (C&C) security events in this quarter.

The trend of botnet (bots) security events is summarised below: 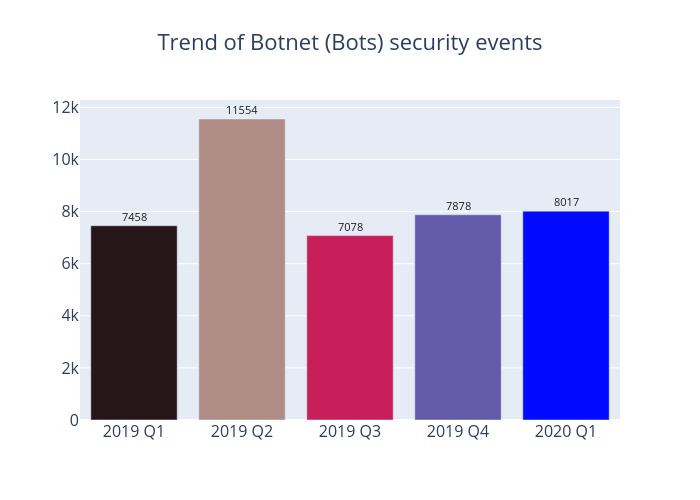 The number of Botnet (Bots) events increased slightly by 1.76% or 139 events in this quarter with Necurs bot experiencing the largest growth rate, increasing more than 16 times; while Ramnit bot had the largest quantitative increase of 775 events. Although the number of Avalanche bot event reduced by 40% to 790 in this quarter, it was still more than double the number in the first three quarters of 2019. Also, although WannaCry bot continued to decline since 2018 Q2, it rebounded by 28.2% in this quarter. Since WannaCry ransomware had ceased operation and would not infect any new devices, the increase might have to do with previously infected devices being re-connected to the network.
HKCERT has been following up the security events received and proactively engaged local ISPs for the botnet cleanup since June 2013. Currently, botnet cleanup operations against major botnet family Avalanche, Pushdo, Citadel, Ramnit, ZeroAccess, GameOver Zeus, VPNFilter and Mirai are still ongoing.
HKCERT urges general users to join the cleanup acts, ensuring their computers are not being infected and controlled by malicious software, and protecting their personal data for a cleaner cyberspace.

3 Shodan is a search engine for Internet-connected devices: https://www.shodan.io/