HKCERT is pleased to bring to you the "Hong Kong Security Watch Report" for the fourth quarter of 2016.

In 2016 Q4, there were 13,681 unique security events related to Hong Kong used for analysis in this report. The information is collected with IFAS1 from 19 sources of information2. They are not from the incident reports received by HKCERT. 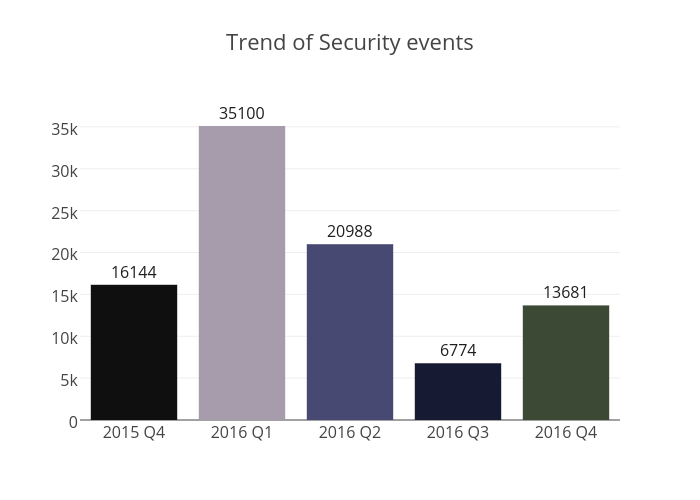 The total number of security events in 2016 Q4 increased significantly by 102% or 6,907 events. The huge increase was due to the unusually small base last quarter, which was caused by the temporary absence of one of our major data sources, CleanMX. Actually the number this quarter was lower than the average number of the previous four quarters. 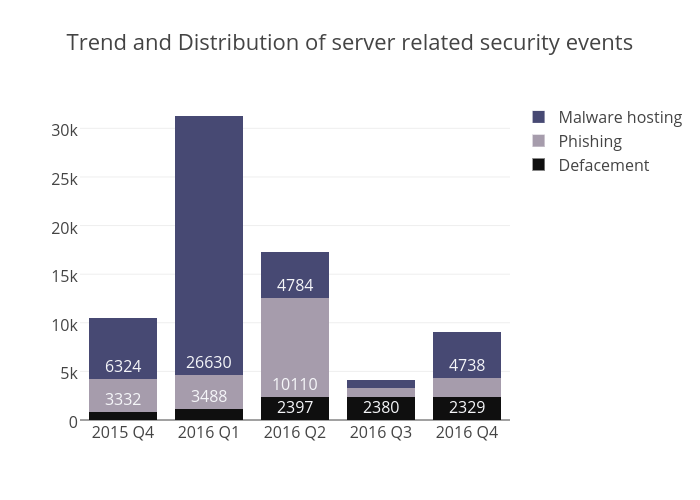 The number of server related security events increased from 4,139 to 9,025(increased by 118%) this quarter.

The domain that hosted the largest number of malware was btjykjj.com. It hosted 543 or 11% of all malware hosting events. At first sight, this domain looked like a malicious domain: the domain name was composed by seemingly random characters; the administrator email address, [email protected] is used by hundreds of domains. However, WHOIS history showed that a year ago the domain was owned by an organization called “Bao Tou Shi Jiu Yuan Qu Ke Xue Ji Shu Ju” which is the Chinese pinyin roughly translated to The Science and Technology Bureau of Jiu Yuen District, Bao Tou City (a city in inner Mongolia, China), which is a unit in the Chinese Government. btjykjj was the short form of the pinyin name. The domain was not renewed after its expiry a year ago. And then it was registered by its current owner [email protected]

We further discovered that the IP address resolved by this domain was responsible for six more malware hosting events. Among which, at least two of them were suspected to be expired legitimate domains. They were gaqylz.com, which is the short form of “Guang An Yue Lai Zhen”, Chinese pinyin translated to Yue Lai Town of Guang An City (a city in Sichuan Province, China) and hfjgg.com, which is the short form of “He Fei Jiu Gong Ge”, a decoration company in Anhui Province, China.

These cases showed that cyber crooks are looking for expired legitimate domains for malicious use. These domains can gain trust from the victims easier, due to their seemingly legitimate appearances, especially to the victims who know the legitimate organizations behind. Internet users shouldn’t trust a URL solely based on its domain name. When in doubt, always do further checking before accessing the URL. 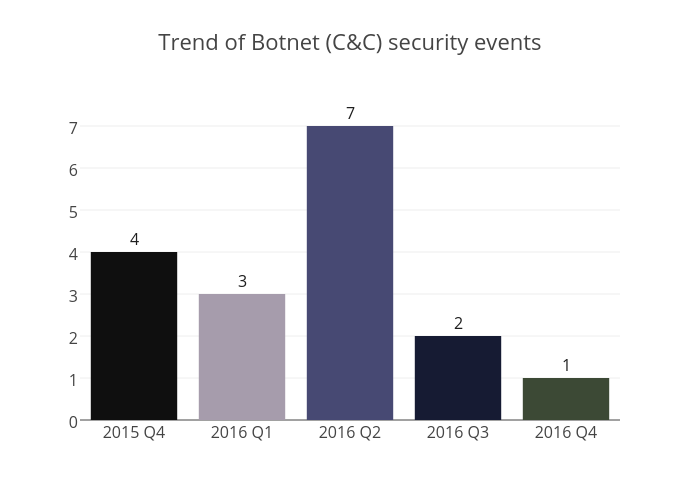 The number of botnet Command and Control Servers decreased this quarter. There was one C&C servers reported in this quarter, which was identified as IRC bot C&C server. 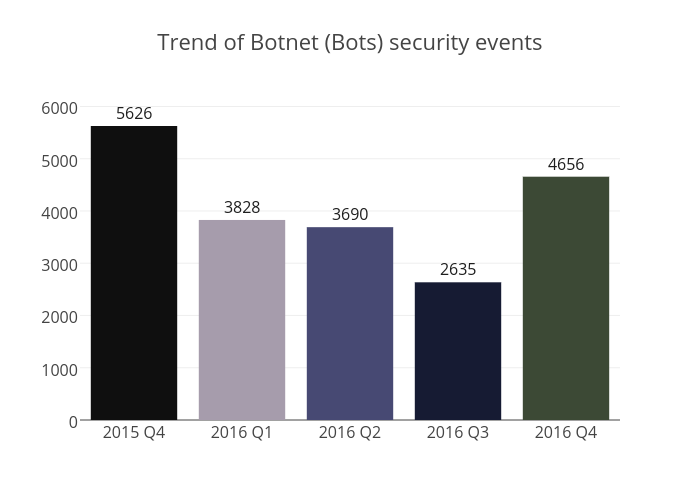 This quarter, the long term dominance of Conficker ended. Conficker has always been on the top of the chart since our first report, leading others by a far distance. However, it was outranked by a new comer, Mirai.

Mirai is a botnet targeting Internet of Things (IoT) devices. IoT devices are Internet-connected devices such as webcams, routers and smart-TVs, etc. They are usually easy targets as most of them are poorly secured and operated by ordinary people who lack security expertises.

Mirai spreads by using telnet with default passwords to attempt to take control of victim devices. It has a built-in username-password list that contains over 60 default credentials. 5 With this, Mirai easily infected hundreds of thousands of devices over the world. If a user connects an IoT device to the internet without changing the default password, there is a high chance the device will be infected in a short time.

In September, the botnet launched a massive DDoS attack to the website of cybersecurity blogger Brian Krebs. The website was hit by a scary 620+ Gbps traffic. Shortly after that, a French hosting company, OVH suffered the largest DDoS attack known today – with peak traffic close to 1Tbps. Then, in less than a month, the botnet launched another DDoS attack to a DNS provider DYN. The attack brought down DYN’s service as well as a few websites that rely on DYN’s service.

In November, 0.9 million routers from a German ISP Deutsche Telekom were forced offline by the Mirai botnet. Researchers found that this variant of Mirai botnet used a new way to spread. In addition to the traditional way of using factory default credentials, it can exploit a vulnerability in specific routers made by Zyxel and Speedport. Then it can remotely infect vulnerable devices through TR-069, which is a remote management protocol.

Cleanup of the malware is difficult. Mirai would disable the port used by TR-069 and telnet so as to cripple the ISP’s ability to remotely patch the devices. Users need to power off the routers in order to clear the malware from the memory. However, if the devices are not patched immediately, they may be infected again in minutes as Mirai is active scanning vulnerable internet devices.
In foreseeable future, Mirai will remain a major threat to the internet.

Avalanche, set up in 2009, is a hosting platform made up of around 600 servers worldwide, which was mainly used by cybercriminals to deploy financial crimeware (e.g. Zeus, SpyEye), issue commands to infected devices (e.g. to send out fraudulent emails, conduct money laundering activities). In order to hide the server actual locations, it made use of proxy server and also “double fast flux” techniques, i.e. changing both DNS and IP address of a malicious domain every 5 minutes, for infected devices to connect to the platform.

A joint operation to take down the “Avalanche” cybercrime hosting platform was led by Europol, and conducted with law enforcement, judiciaries, and security researchers from more than 30 countries. In this operation, 5 individuals were arrested, and 39 servers were seized, and 221 servers were put offline by the hosting providers. Over 830,000 website domains were seized, blocked or “sinkholed”.

Around 350 Hong Kong IP addresses were affected. HKCERT has notified the corresponding ISP to contact their affected clients.