HKCERT is pleased to bring to you the "Hong Kong Security Watch Report" for the first quarter of 2015.

In 2015 Q1, there were 10,936 unique security events related to Hong Kong used for analysis in this report. The information is collected with IFAS1 from 19 sources of information2. They are not from the incident reports received by HKCERT. 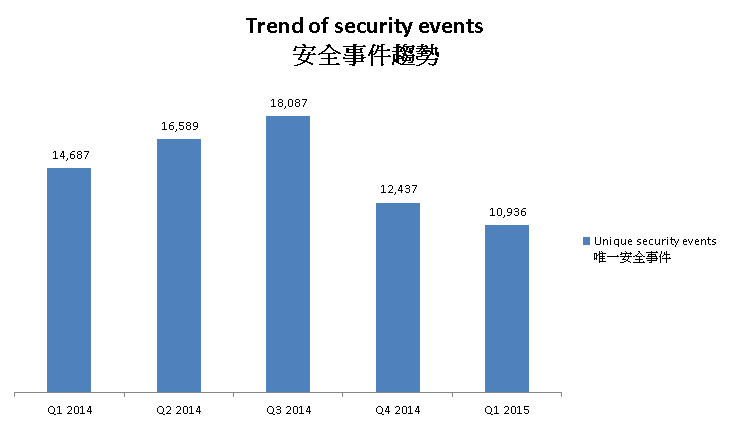 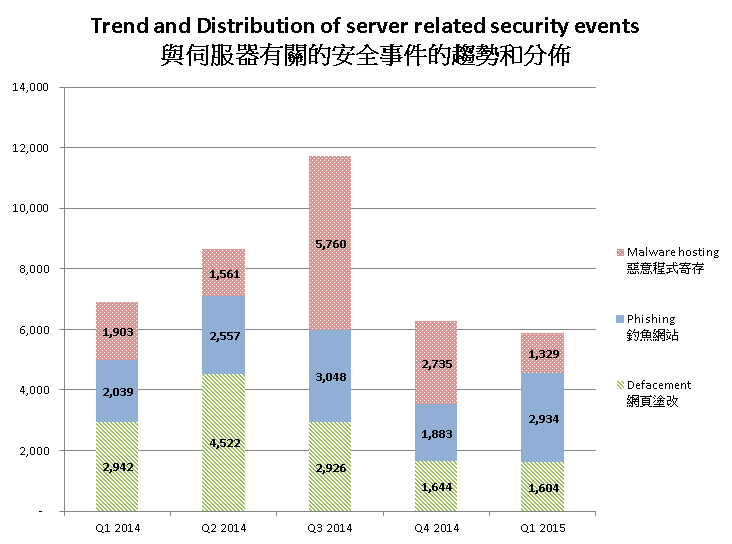 The number of server related security events slightly decreased by 6% in Q1 2015.

In this quarter, the number of defacement events and malware hosting events decreased by 2% and 51% respectively; while the number of phishing events increased significantly by 55.8%.

The increase of phishing events was due to the increase in URL/IP ratio. The ratio this quarter (14.11) almost doubled the average ratio of the previous four quarters (7.48). The rapid increase of this number reflected that the number of URLs hosted in each IP address increased. In fact, the number of involved IP addresses actually decreased. 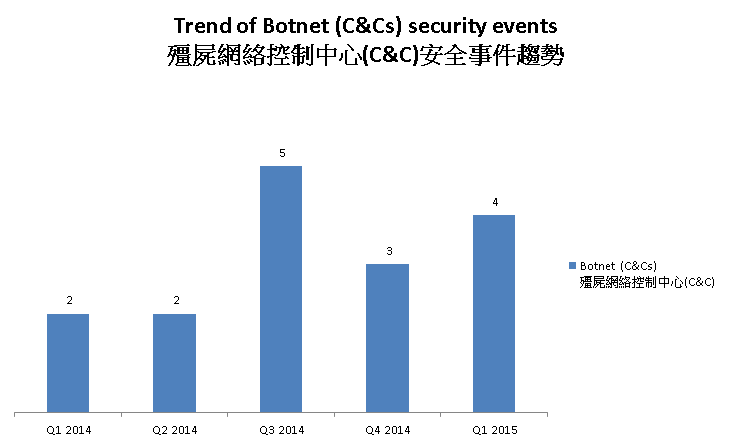 Number of Botnet (bots) on Hong Kong network continued to decrease in this quarter since Q3 2014.

However, researchers found out that ZeroAccess was reactivated after being silent for six months. ZeroAccess was once much stronger than today in 2013. Security researchers from Symantec found a flaw in the P2P communication mechanism in the botnet that enabled them to detect and clean up a large amount of botnets in July 2013. Law enforcements and other security vendors then launched another operation against ZeroAccess in December of the same year. After some struggling, the botnet operators surrendered and were silent since July 2014.

On 15 January, the botnet came back to life and started distributing click-fraud templates to compromised systems. Though the botnet operators didn’t attempt to infect new systems for more than one year, the reactivation of the botnet proved that the operators are putting new efforts to the botnet. Though we still have not yet detected the rise of ZeroAccess infection, we will pay more attention to its revival.

The eighth botnet, Gamarue, is another botnet that caught our eyes. Its number increased two folds to 52 events, which was a record high since Q2 of 2013. Researchers found that the botnet operators now use a new approach to spread the botnet – through macro in Microsoft Word documents. When a victim opens a malicious document, which was often sent via spam email, the document content will urge the user to enable macro. Once it is enabled, the macro will perform a multi-staged decoding and program execution to infect the computer.

Gamarue can steal sensitive information, allow hackers to remotely control the target system and further infect the victim with other malwares. In order to avoid being infected, HKCERT urges computers users not to open the attachments in any suspicious emails and do not enable macros in MS office documents that are from unreliable sources.