HKCERT is pleased to bring to you the "Hong Kong Security Watch Report" for the second quarter of 2015.

In 2015 Q2, there were 21,787 unique security events related to Hong Kong used for analysis in this report. The information is collected with IFAS1 from 19 sources of information2. They are not from the incident reports received by HKCERT. The total number of security events in Q2 2015 increased dramatically by 99% or 10,851 events, reached a record high since Q2 2013. The increase was due to server events. 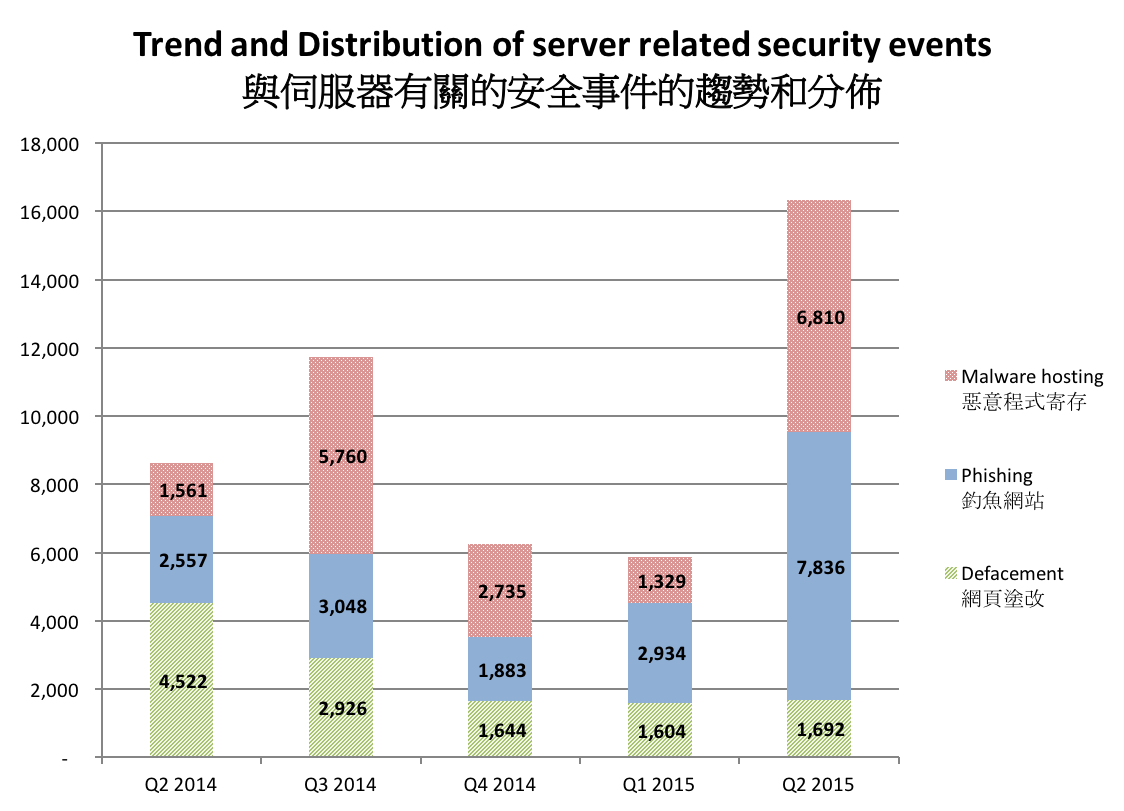 The increase of phishing events was contributed by a few phishing campaigns. In this quarter, the top phishing target was a Japanese gaming site hiroba.dqx.jp. This campaign utilized more than 10 IP addresses and 3200 URLs, which equals more than 40% of all phishing events. The second and third phishing targets were both Chinese online merchants, namely taobao.com and xzhjia.com, more than 1600 and 1200 URLs were targeting them respectively. As of the time of writing, most of these phishing URLs were no longer accessible.

Among the malware hosting events, about 41% or 2828 events were hosting HTML/Drop.Agent.AB malware. It was found that this malware was related to the Ramnit botnet. As shown in Figure 3, the HTML/Drop.Agent.AB events started rising in March. In February, a takedown operation was carried out against the Ramnit botnet, a lot of bots were identified and cleared. The sudden increase of Ramnit related malware hosting events may reflect that the cybercriminals behind were working hard to recover the botnet. More about the Ramnit botnet will be described in the botnet section. The number of botnet Command and Control Servers remains unchanged this quarter. Number of Botnet (bots) on Hong Kong network slightly increased in this quarter, stopping the dropping trend since Q3 2014.

In Q2 2015, the number of botnet infections in Hong Kong increased by 8%. The Virut botnet increased significantly by 87%. It took over Zeus to become the second largest botnet in Hong Kong.

Other than Virut, three botnets, namely Ramnit, Tinba and Dyre, entered the top 10 the first time.

Ramnit is a fully-featured worm. It can steal various types of sensitive information including web credentials, FTP credentials, browser cookies and files, etc. It can allow the attackers to access the victim’s file system and take control of the computer. It can also download additional malwares.

Ramnit first appeared in 2010 and spreaded quickly. Now it has infected more than 3.2 million computers worldwide. On 25 Feb, an operation driven by law enforcement, led by the Europol and assisted by industry partners Symantec, Microsoft, and others, seized the servers and other infrastructure owned by the cybercrime group behind the Ramnit botnet. A large amount of victims were identified that it became the 6th botnet this quarter.

Tinba is a banking Trojan that can perform Man in the Browser (MiTB) attack to steal banking credentials. Tinba was first identified in 2012. It first targeted the users in Turkey and then users in Czech. But now it targets a large scope of banks worldwide.

Tinba employed some interesting anti-sandboxing tricks to evade analysis. First it detects user interactions by checking the mouse movement and the active window. If Tinba is running inside a sandbox, the mouse location and the active window will always be the same, it will not execute the main routine until some user interaction is detected. Moreover, it will detect the disk capacity. If the disk is too small, it is likely to be a sandbox environment. Tinba will just quit in this case.
Tinba spreads through exploit kits and spam emails.

Dyre is a banking Trojan that successfully stole millions in 2015. It monitors the website visited by the victims. Once a victim logins to one of the targeted banks websites, Dyre will display a fake screen claiming the site is experiencing issues and asks the victim to call a number. In the phone call, the criminals would try to social engineer critical information from the victim. With this information, the criminal will transfer money from the victim’s account to offshore accounts. To make things worse, the criminals will immediately launch a DDoS against the victim for distraction.

Like Tinba, Dyre also employed anti-sandboxing trick. But instead of using a few tricks, Dyre use only one – by checking how many processor cores the system has. If the machine has only one core, it will terminate. As most sandboxes were configured with only one core and most modern computers have multicores, this simple trick was proven to be highly effective. Researchers tested a Dyre sample with eight sandboxes, all of them failed to analyze the malware.
Dyre spreads through spam emails.